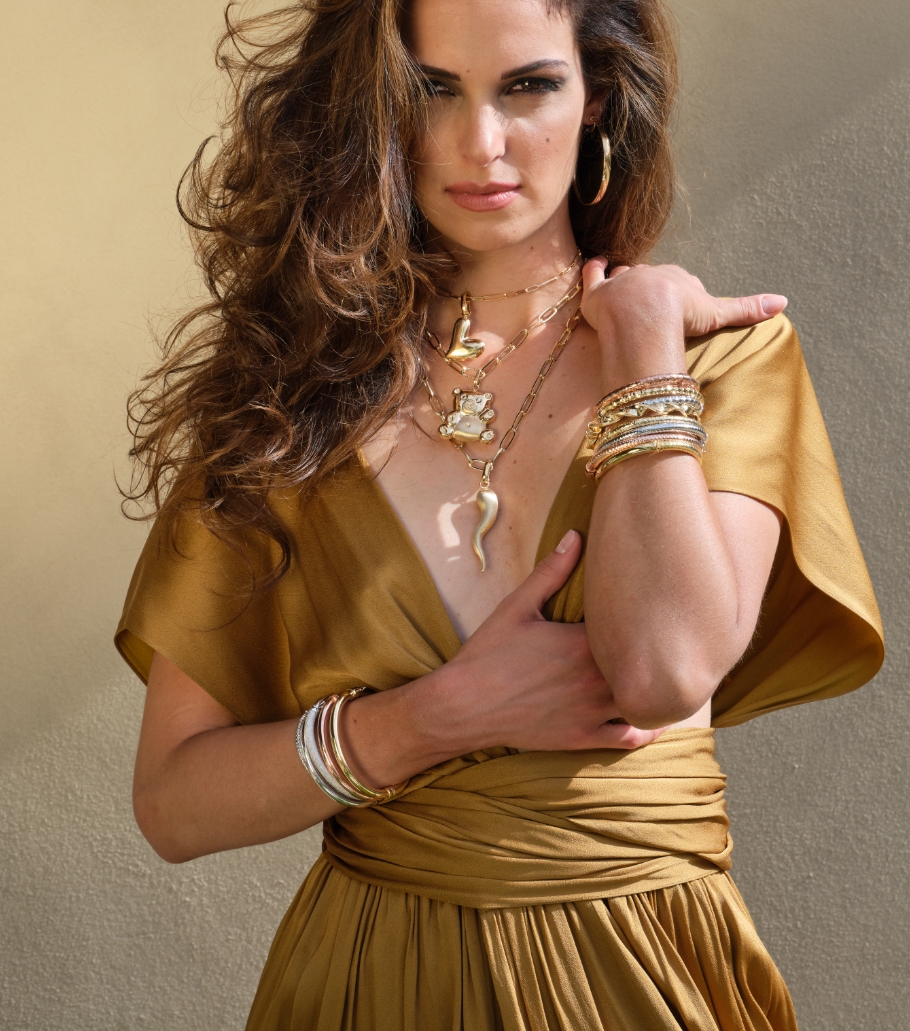 Experience, design and technology for the creation of increasingly sophisticated and personalized collections. Light, elegant and original jewels.

Tiziano Aramini could write ‘jack of all trades’ on his business card due to the various roles he has held and the numerous tasks he has taken on since 1999. Designing and planning jewelry prototypes and even the machinery to make them, supervising the quality, activating commercial and promotional ideas: there is no step that is not within his competence. In a word, all-round know-how, exactly like his father, Giuseppe, who founded Loto Preziosi in 1972. “Having set up our business in Arezzo’s gold district, we have often had to develop new technologies and invent new machinery to achieve a certain effect. It is part of our DNA to always try to make progress, to offer something new to our customers, who have evolved many times over the last 50 years,” says Tiziano. “When my father started out, yellow gold was the height of fashion but then it went completely out of vogue for about 20 years. Nowadays, every company offers collections and total looks in yellow gold but we have never stopped using it. It has always been our core business. If anything, we have adapted our production to the various requirements which differ according to the market. In Europe, for example, we use 18 kt, in the Arab countries 21 kt and 18 kt, the USA prefers 14 kt and sometimes 18 kt. Up until ten years ago we also exported to the UK, where 9 kt is traditionally used, a weight that has recently become popular here too, purely for economical reasons.”

And speaking of the global market, the situation can particularly be gauged during a trade fair like Vicenzaoro. Any news from the September edition?

“Loto Preziosi has been attending Vicenzaoro since the very beginning of its history but the September edition was a pleasant surprise, also because we expected to find fewer companies and visitors. Instead, it was far beyond our expectations. The common feeling among all our colleagues, was that all the customers were yearning to buy and get back to working hard. They weren’t there out of curiosity as often happens at trade shows; they came for a very specific practical purpose. This was also helped by the new exhibition layout, which was more organic and functional in terms of finding the company best suited to their needs. At least that’s what they told us. We were also able to develop new contacts with potential foreign customers. Where were they from? United States, Israel, the Emirates… At every trade show, we offer between 300 and 500 new articles to add to our total of 48,000 references. With such a wide range of products we are really able to satisfy every taste and demand. And we also often create ad hoc lines for a specific market. Take the Arab countries, for example. They are not all the same: the public in Kuwait is different from that of Oman, Dubai or Yemen. And talking about Africa does not mean being able to offer customers in North Africa the same things as in Central and South Africa. But this is the most beautiful part of our job: being able to interpret very different visions and aesthetic concepts while imprinting the Made in Italy touch.”